Here are some astro-readings for the last time Pluto and Saturn were dancing the tango together from late 1980 to 1983. You might be able to see the transits of Pluto and Saturn in these charts and realise, lo and behold, that it was playing out in Libra over Esther’s Ascendant/Descendant, with natal Venus on the Descendant square her moon. The slow transit moves from 23 – 28 degrees of Libra (all about relationships) before it rides off into the distance.

It is interesting as it all reflects Esther’s meeting up with Jerry, their marrying in 1980, Jerry introducing Esther to a scary Seth but Esther finally letting go of her taboos (when Saturn was conjunct her Chiron in Scorpio) in 1983/5, meeting Theo and learning to meditate in order to meet her ‘spirit guide’ and at the end of 1985 beginning to type and speak for Abraham. 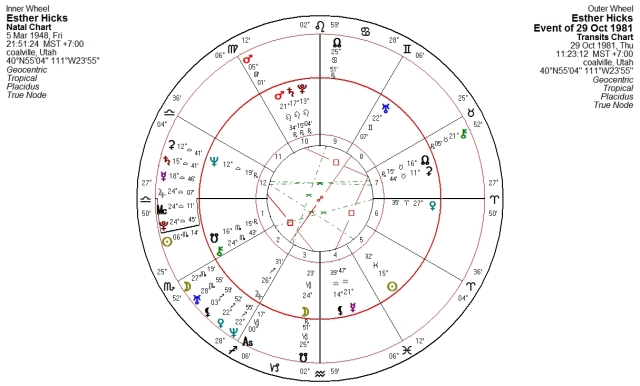 It is in Nov 1980 that the intensity begins for Esther rather than when the prospect of channelling a discarnate energy called Abraham emerges. From 1980-1982 Saturn and Pluto are very close together and conjunct, Neptune is conjunct Jupiter, Chiron is opposite Chiron, Jupiter enters Scorpio and Uranus enters Sagittarius. 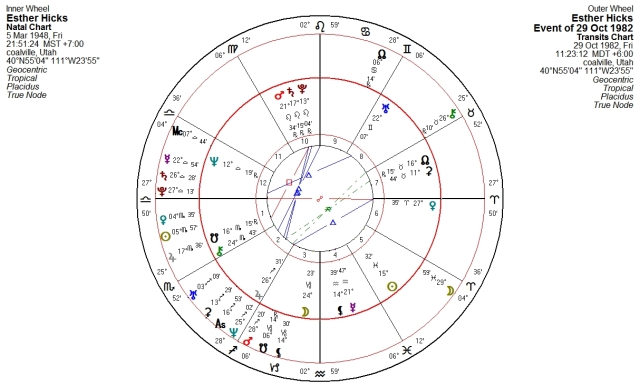 Today, and from last year, it is the first time since 1983 that Pluto and Saturn have returned to revisit the sensitive points in Esther’s chart/life. All sorts of things must be coming up for her within the surge of energy, touching on events and things that are not on the public record, personal family type things.

This steers me away from the idea of a wealthy person becoming wealthier to the mature version of the younger woman having made a second marriage and wondering what part she would play in it as Jerry had already accomplished so much. She would become the vehicle for their evolution in her capacity as speaker for non-physical, giving meaning to the second part of Jerry’s life.

However, to put this all down to the law of attraction is to miss the fact of the massive energy being there whether or not Esther teamed up with Jerry and found Abraham. Astrology gives law of attraction the missing empirical baseline, because astrology relies on empirical evidence providing truth for its definitions, whereas to believe in Abraham-Hicks is a matter of faith.

Before, in the early 1980s it was all playing out in Libra. Today it is all playing out in Capricorn. This is the time of re-defining the collective order and the purpose of society. All of our relationships at many levels have been life-affirming and directional but to what end? What is a ‘human end’? Do we work towards one or is it the job of history to define us?

This then steers me back to the question for Esther about what she wants from what she now offers. How does the story wind up or down to a conclusion for the speaker for non-physical? Esther is certainly offering her hourly talks with much gusto, leaning over the table towards the camera with an intensity we do not see on stage as she moves around, or when talking to the person in the chair as she stands still. I think perhaps Abraham came in on the energy trail of Pluto back in 1980.

When Pluto is found, for example in the 12th house of a person’s chart, it is considered to be a ‘guardian angel’. Esther’s most prominent relationship since 2011 is with Abraham. The current transit will end for Esther when Pluto gets to 28 degrees – one degree past her Venus and the Ascendant axis. This is at the end of Nov 2023. Right now its conjunction with the moon (square Venus) continues.

This entry was posted in Abraham-Hicks, Astrology. Bookmark the permalink.