Theresa May the Person & The Law of Attraction

“If you can keep your head when all about you
Are losing theirs and blaming it on you,
If you can trust yourself when all men doubt you,
But make allowance for their doubting too;
If you can wait and not be tired by waiting,
Or being lied about, don’t deal in lies,
Or being hated, don’t give way to hating,
And yet don’t look too good, nor talk too wise:

“If you can dream—and not make dreams your master;
If you can think—and not make thoughts your aim;
If you can meet with Triumph and Disaster
And treat those two impostors just the same;
If you can bear to hear the truth you’ve spoken
Twisted by knaves to make a trap for fools,
Or watch the things you gave your life to, broken,
And stoop and build ’em up with worn-out tools……

All good natal astrologers must know something about their subjects during their apprenticeship and during consultation. Today I find myself interested in the person called, Theresa May. Not just the 10th and 11th houses parts of her which show us something of her public persona and role-performance, but as near as I can get to the heart of the person…… while realizing that I am, like everyone else, only able to see the other person through the filter of who I am: Law of Attraction. A person has at least 12 parts to them not just the two as the press would have us think.

Politicians and journalists belong in the 11th house or have a strong Aquarian vibe at work or Uranus is strongly placed in their chart/life. I have never relied on anything I read in the press, nor have I ever benefited from anything a politician has said or done or the way the government organises my life in its various ways – with one exception. I benefited a great deal from Mrs Thatcher’s Enterprise Allowance Scheme in the 1980s when I wanted to start my own business as an independent special tours operator. Without this £40 per week allowance, I would not have managed to make it a reality – and I would not have come to meet Jean the Magnificent.

I liked Margaret Thatcher all along. I think I might still have the front page of the newspaper somewhere from the day of her first election win in around 1980? It was a very big deal as she was the first female PM. I was not aware of her political agenda, but I had inherited a sort of Conservative bias from my parents – all of which was unspoken and un-thought-out as far as I could tell. I lived in a place which had always held a Conservative seat in parliament, so it was rather pointless in my opinion to bother voting as it was already a done deal – and I did not care anyway. I have voted once in my life though, and that was for Thatcher’s second term in office – it was as a sort of thank you for my Allowance.

Mrs Thatcher was the daughter of a grocer and looked up to her father. This came up in the various news items from time to time. Theresa May is the daughter of a Church of England minister. I have not read much about Mrs May but looked around yesterday for some sort of objective biography of her from before she became newsworthy. I liked this piece from 2014, especially the photo which might or might not be ‘real’ – probably posed, but carrying a little confirmation from her perhaps:

Interesting that both Thatcher and May have Saturn in Scorpio, and I am tempted to think that May might have it rising like Thatcher because there are accounts from people of how testing it is/was to just chat informally with both women. Saturn rising in any chart is something you can either deal with or not as it is a kind of barrier to what is inside the person. They have developed this persona to help them function in life. Both woman have sun in Libra which is naturally and authentically friendly. Let’s look at both charts remembering that the time of birth for May is unknown and that this is particularly significant as the moon is on the cusp of Virgo. The chart for Margaret Thatcher is A rated so it is reliable. What follows is based on the charts primarily and weaves in the personal information I have garnered in the last 2 days. And memories of Thatcher. 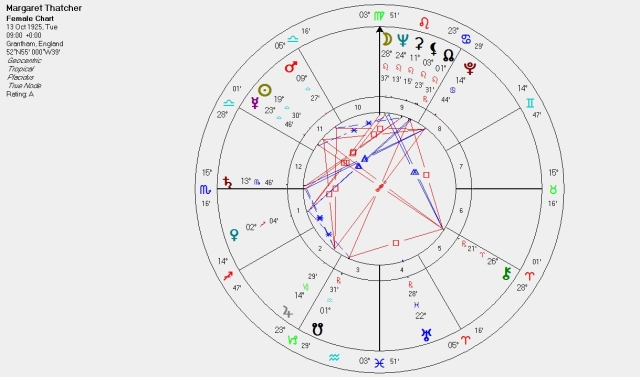 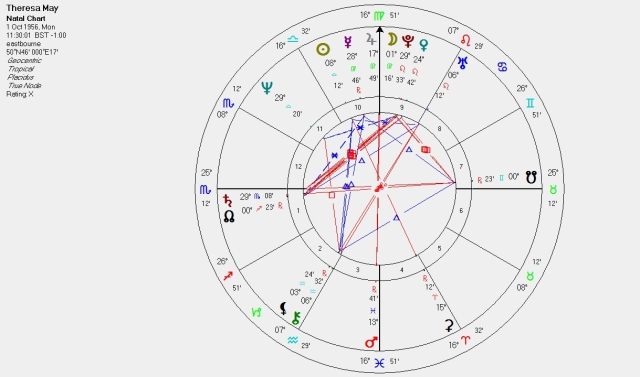 Mrs May’s rhetoric, or the way she addresses the public, has the cadence, rhythm and tone of Thatcher, although the vocabulary is different. We are told that May admired Thatcher. She would have been starting her career in politics at around the time Thatcher was elected, a bit earlier perhaps. The early eighties were extremely difficult for Theresa after she married in 1980. Her father died in an accident in 1981 and her mother died the following year. The transits bear this out. She was in her mid twenties. The religious upbringing from her father can be seen in Mars in Pisces on the IC – the 4th house is often/usually about our father. And Saturn continues that story, unless the mother brought a similar energy into the life, in which case Saturn rising would reflect the mother’s influence which is also revealed in the 10th house. Also, this Mars is opposite Jupiter which rules religions so there is a strong but uneven dynamic there involving a form of spirituality.

So both women at root have a certain idealism in action; they are women with a mission, a calling. They also both liked to wear nice clothes, and shoes, like all Libras and, with the moon involved in the 9th house, along with their mission, they enjoyed time spent in the kitchen. I expect that the absence of children from Theresa’s life is a private and painful thing; and remember how dislocated the relationship between Thatcher and her children was as presented to us by the media. It must be hard to be on a wold wide political mission for the benefit of mankind and also to raise children. Sacrifices have to be made – Neptune is about sacrifices as is Christianity. Note Thatcher’s Moon conjunct Neptune. And note that it is in regal Leo – remember her announcement after her son became a father? She said ‘We have become a grandmother’, or’ we are a grandmother’. The press accused her of thinking like the queen.

I think that Theresa’s moon is most likely in Virgo as I believe she is the quite shy person that some have mentioned. She has not the natural leaning towards ‘regality’ as Thatcher despite Venus-Pluto in Leo. But it might develop if anyone ever offers her as much support as Thatcher received. Moon and Jupiter in Virgo make for a very analytical and hard-working person with a keen eye for detail. This person is very good at her job – she has the experience and the intelligence. She just appears to be having trouble with what her husband is apparently so good at: being personable. For a shy and intense person, small-talk is extremely hard to manage. The Moon-Pluto-Venus conjunction square Saturn is terribly hard to float – it is like asking Winston Churchill to lighten up. See the ingredients in her chart. With more practice at this challenging job, she will become so much better at the finer points – she truly must want to be as Libras are the most sociable of signs.

There was as much dispute about the Iron Lady (Saturn in Scorpio) as there is currently about Mrs May who stepped into the breach at a time when no one else was forthcoming, I seem to recall. It seems to me (and as I have said I know nothing about politics) that it was a reasonable decision to plan a general election when she felt ebullient and wanted confirmation of support. I think I might have done the same thing – Jupiter was active in her chart at the time. In hindsight we can and do make all sorts of other comments. The planets that were in play when she was feeling confident, Pluto, Jupiter, Saturn are now either retrograde or about to go direct, so I see something brewing that will return her to the good feelings in the autumn. Of course by that time, it might feel better to her to quit depending on whether or not she is another iron lady.

The bottom line here is that we get what we project, energetically speaking: but which is the larger force at work, the Prime Minister, the woman with a mission, or the general public? Certainly the most unreliable of the two is the latter which is like the ocean with its invisible currents and hidden monsters. If Mrs May can ride this tide in her fortunes, if she can even ‘lose, and start again at (her) beginnings’ then she will have done as much as Thatcher character-wise, in my humble opinion, and she will not have had to go to war to prove anything. The general public is a huge single entity, it is the collective; it is ruled by Neptune and governed by Saturn. God help anyone who wants to please everyone for it is impossible. What has been revealed is how divided this country is at present. A little or a lot like the US who had the opportunity not to disappoint another experienced female politician but chose to disappoint her after all. Is the US happy with its decision?

Anyway, I like the chunky chain necklace which suits her like it does Diane, Christine Baranski in The Good Fight. Libra and looking right go together but it is not about pleasing anyone except themselves and they usually have multiple fashion ideas that seem to argue with each other. A dual sign is always in flux.

This entry was posted in Astrology and tagged Astrology. Bookmark the permalink.