Hicks, Cayce and The Queen

I have enjoyed listening to the recordings of Abraham-Hicks while driving and walking, keeping almost up to date with the downloads as they became available. It seemed as if with each new person in the hot-seat there was a new answer. But have I noticed a dropping off, a paring down of unique responses, or is it me and my issues interfering with my personal resonance to All That Is? With almost every questioner these days the answer leads them back to the meditation process at the start of each new day.

In the early Abraham years it was a less absolute recipe to successful alignment. Instead of the way to alignment beginning with meditation, it was about each person finding the place or situation they individually enjoyed being in most and then zoning in/out by simply enjoying their current moment. It sounded like a more individualised recommendation. Esther is doing what the famous psychic, Edgar Cayce did which is to offer what works so well for her personally. Infinite intelligence however knows that it is very much harder, if not impossible, for some people to meditate, or even to rest their mind for a moment – despite application on a regular basis. Not only is it harder, it feels horrible rather than wonderful as Esther describes it.

The secret to Esther’s great fluency under a light trance is that she is more present in the translation of Abraham than one might think, although this is not a constant. She has times of non-interference, and times of complete interference; most often it is some of both. The common factor is that Esther is a talker so she finds it a normal thing to fill in gaps in conversation. As she has been performing as a medium for 30+ years, mostly in partnership with husband Jerry who left in 2011, she must continue to find reasons for keeping up the pace year after year. As she is human she will find it necessary to slow down in some ways as time goes on. It must continue to satisfy the natural drive in her to stand on a stage and ‘preach’. Actors and other people who thrive under the gaze of an audience often need the energy of this powerful feedback as much as they need food. She has the same sort of gift as Billy Graham, remember him? (He will be 100 years old next year.) He gave people individuality in relation to Christianity – this helped him win over audiences. Queen Elizabeth was drawn in by his charismatic style apparently. His birth chart has a reliable time. 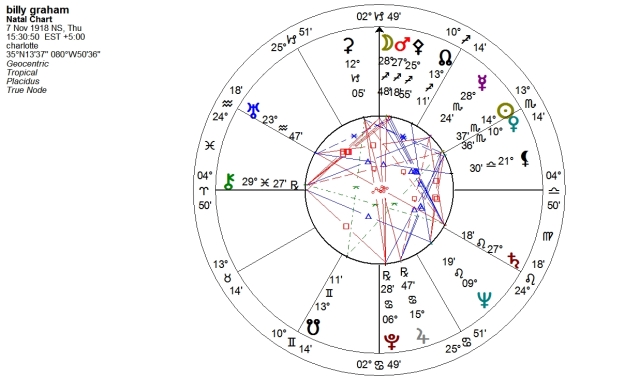 I notice these things because I look at people through the lens of astrology. Many years of examining birth maps have shown me how the dynamics in the chart matches the dynamics in the person. Look at the birth chart of our good Queen and note Saturn, the planet of duty and boundaries and hard work on 2 of the cusps of the 4 important arms of the central cross in the chart: the Ascendant and the Midheaven. There is relatively little conflict in her ability to be dutiful, to live a long life of duty. If the chart were different, it would be a different queen. 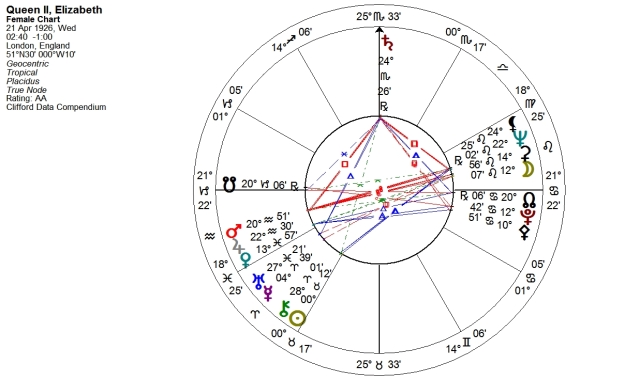 I was also comparing the charts of different mediums to see how the information they delivered lined up with the sort of people they were in life. Jane Roberts is interesting as her birth time is secure so her chart is as correct as it can be. Her chart and her biography shed light on the Seth books. 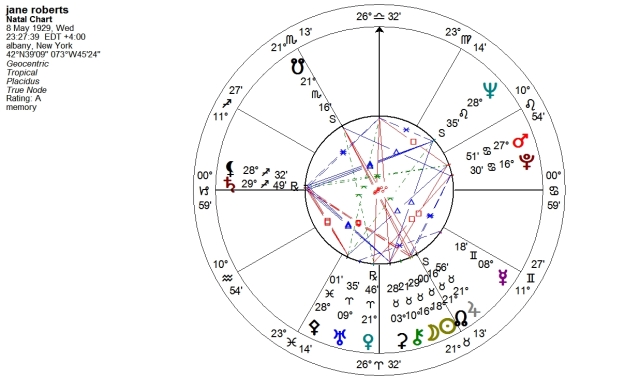 The same can be said of Helen Shucman who scribed the Course in Miracles. As a psychologist she could see herself clearly alongside her role – privately this conflict was agonizing for her. Her short autobiography is well worth a read and is delivered as a PDF on the ACIM website.

Edgar Cayce worked hard all his life to freely give readings, mostly of a medical nature to those who were in need. Here is his chart with a ‘probably’ correct time of birth. There is a half hour biography video available on You Tube. 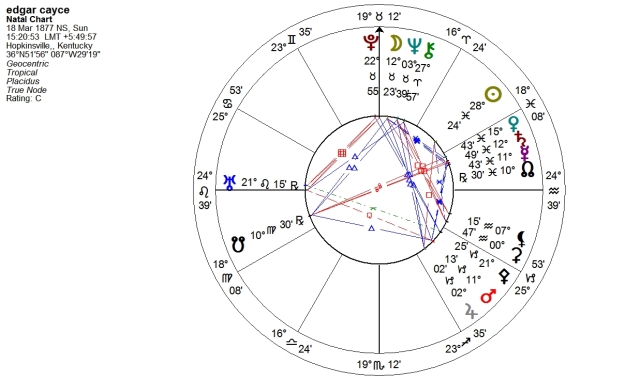 A little biography together with some ability to read the birth chart allows us to better understand the people who interest us and to help identify the ego as well as the more authentic self.