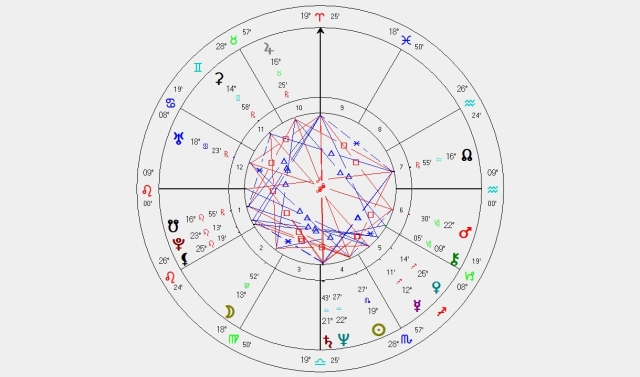 This is my birth chart. As you can see from the general pattern, it is different to Esther’s chart. (Please see the post on Esther’s chart which has an unknown birth time. And the page Astrology Examples.)

A few days ago, 19-4-17 to be exact, I was sitting in a favourite spot in some beech woodland I enjoy – especially at this time of year when there is a carpet of bluebells and wild garlic – and the weather is mild and sunny. The new leaves are a translucent green not yet making complete cover for the deer. I am usually at one with the world here, but on this occasion I suddenly felt a tangible dread in my solar plexus. It was so unexpected as there was nothing that was frightening in this place, or in my life in any other respect. Mystified and agitated, I made my way home and went straight to the astronomical ephemeris to see what was happening in the sky that might explain this. (As above, so below.) I found that Pluto had, this day, stationed retrograde.

Planets, at certain times appear from our perspective on the Earth to be going backwards – it is to do with the relative speed of the orbits. Data has shown that this effect magnifies the intensity of the planet for the time it is slowing down to either begin its period of either retro-orbit or direct-orbit. During the retro phase the essence of that planet is more internalized for us. On this day Pluto, the slowest moving of the energies in our life, whose meaning is about transformation, change, life and death etc. had stopped at the degree which was exactly 90 degrees square to my IC, the point in the chart opposite the midheaven and at the exact base of the chart.

The midheaven is the highest, most open place in the chart where we are on public display and interface with the world. The opposite position is our private self – if we had physical roots, this is where they would be. As you can see from my chart, I have 2 planets and the sun in the 4th house. The bottom of the chart provides the cusp of the 4th house. The sun in this example is in Scorpio which is ruled by (vibrates in harmony with) Pluto. So this was the cause of my unnamed fear. Something was being activated within me that was deeply hidden from my conscious knowing. By the way, Esther has 3 planets in the 10th  house which is opposite the 4th (a stick always has 2 ends….) – when we meet Esther we meet this Leo interface of her most visible self with the general public, we do not meet her one-to-one self represented, I think, by Libra rising.

The best approach to my Pluto mystery was to look back to see what happened when Pluto had made its conjunction to this position back in 1979, because the passage of any planet tells a significant part of our story as it travels with us through life. For more information I could check to see what had happened at the time of its conjunction to all the planets in between now and back then. I could even go further back to its conjunction to my moon when I was 11 years old. Our personal moon is the most sensitive place in our chart, the place where we find safety and security, it represents our feelings – its vibration is like the sign of Cancer which has similarities with the 4th house. The birth chart is a tapestry of vibrations. We all have every sign and planet in the chart at some point, each telling its story in a different way. Remember, it is not cause and effect, but a reflection of an inner vibration.

It took me a while to put it all together but I came to see what was playing out. The timing of it was clear. How it would play out would be a test of my strength on every level. In a life that has not been easy, 1979 was the beginning of a 6 year period which was the most difficult. But this ‘worst of times’ had preceded some following years of the ‘best of times’.

This is the chart for a day in 1979. It can be measured as a transit chart alongside both my chart and Esther’s chart, and anyone else’s chart. 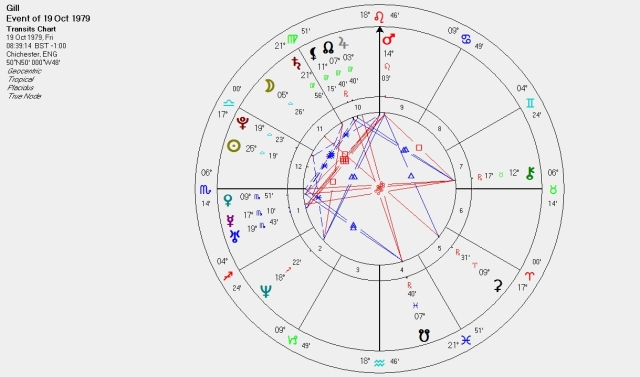 Meantime, one week from this day, once Pluto had gained speed retrograde I would be once again freed of this feeling of doom. I can confirm that as I write this today, I am feeling more or less back to normal. It will take till 18-1-18 for Pluto to return to where it was in the woods. Before then I have time to prepare myself for what is ahead and also to be ready for some new input of pure, positive energy which is on the way in by 17-7-17 – this will help me deal with 2018, 2019 and some of 2020 as Pluto and Saturn will be at work triggering the energy of Mars in the 6th house which is part of a tense T-square involving Saturn, Neptune and Uranus. Transits of Pluto are felt to be difficult as they bring a slow process of complete transformation described by the planets and the houses in this part of the life-story.

So this is how change (contrast) can be monitored on the map of our life. Our birth chart shows us the patterns at work in our life – the geometrical squares, trines, sextiles, conjunctions, oppositions etc.. all linking different energies (of the signs and planets) together. Some are easier than others. The more difficult aspects we have, the more ‘contrast’ we have chosen to experience. As the different planets and various other points move on through space and time they take up positions which sometimes trigger these chart patterns. They mirror for us our different lessons or experiences – our opportunities for soul growth.

It is always good to aim for perfect alignment with Source energy – every day. But it will be much easier for some individuals than for others to arrive at that good place, both in general and on a daily basis. The differences between people can be seen in the chart for our time and place of birth. We come in with a pattern which we work with throughout our life.

The transits are available for reference in the Ephemeris (in many bookstores and online) or www.astro.com where you can also make your birth chart (if you know your time of birth) and print it out.

I hope this is more clarifying than confusing. For beginners it might seem incomprehensible. The way I started with astrology was with a carefully selected Beginners’ Course.

Thank you for reading – comments or questions are welcome and will receive a response.

This entry was posted in Astrology and tagged Astrology, Esther Hicks, Law of Correspondences. Bookmark the permalink.