It was on 25-4-19 that indicator #10 (Pluto) stationed retrograde at 23 degrees of the 10th condition (Capricorn) and Saturn at 20 degrees was soon going to do the same on 29-4-19. I was following the progress of these 2 indicators which when combined offer a great deal of resistance if they touch the same degree in a person’s natal chart. I have a tense T-square sitting on my IC the bottom of the chart involving indicators #4, #6, #8, and #9 in a cardinal sign at degrees 18,19,21 -22. This transit is far harder if your point or configuration is hard.

The degrees which are of interest in this context in Esther’s chart fall at 24 & 27 of the 10th and 1st conditions, Capricorn & Aries. While I was feeling immense tension at the time of the first station retrograde and leading up to it and after it, Esther would have to wait a while longer although I recall listening to her show at the end of April in Asheville and thinking that she was having difficulty in her close family relations at this time due to the incidents she was using for illustration. The talk was on 20/21-4-19. On 24-4-19 Pluto would stop in its tracks emphasising the energy. I could feel that she felt it and this gave me insight into the seam which exists between her normal self and her Abraham self. Remember that Esther is the human filter complete with limitations bringing through infinite energy only to the extent that she can.

I made notes as I listened. I also listened to some of the next seminar. But I was troubled now. Troubled mostly by my own passage as staring into the abyss is not for the faint-hearted and I am faint-hearted, but also troubled as I felt I had lost some faith in the solidity of the Abraham persona – which might have helped me a great deal at this most difficult time. I knew that if I wrote about it I might feel a little better to see it objectified in prose, but I also knew that what I would say would be critical and negative. I wanted to avoid this as I could not see that it would do anyone any good. So there is a gap on this site which represents my not listening to the material which no longer helped. Also, in my condition of mental and emotional breakdown, I could not write or think coherently.

On 16-11-19 Esther experienced her Jupiter return which happens once every 12 years so she would have been feeling fine at that point. But on 19-1-20 Saturn and Pluto were at 23 degrees – within a degree of Esther’s moon which is a very sensitive place in anyone’s chart. We feel out our moon better than any other indicator (the cusps of the main angles are sensitive as well). Esther has the square, which holds tension, between the moon and Venus – but these energies are friendly so the tension of the natal square is nothing she would have cared much about; it might even help her in life. The transit of Pluto and Saturn to the moon however, would not have passed unnoticed; and she has the pair conjunct in her natal chart along with Mars. This will be energised at the same time and complement whatever she might hope to achieve. The moon in Capricorn also resonates with the indicators in the 10th context (house) as it is the natural home of Capricorn. Make no mistake this is heavy energy for anyone: irresistible force meets immoveable object.

The transit of Saturn passes over her moon at the end of January quite quickly and Pluto reaches it by 20-2-20. Through January and February her personal narrative is intensifying – she draws events into her life which shape themselves around her intentions.  Today she has Jupiter and Mars on her 24 degree moon as well as Pluto which will station retrograde on the same degree on 25/6-4-20. 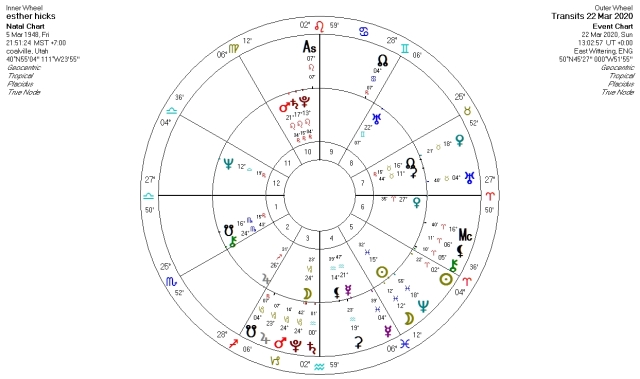 Jupiter and Mars add plenty of energy to this transit of transition and by 5-10-20 it will be back to 22 degrees and then proceed forwards reaching the 24 degrees by 26-12-20. Esther has Mars involved in her natal conjunction of Pluto/Saturn meaning lots of resonance in that 10th context which is her apparent ‘happy place’ where she loves to stand on the stage in the spotlight and heap wisdom on eager disciples. She is ever on her mission to spread the word, something that my partner vowed would never happen with our guidance (who accepted the name, Arthur). I think my partner felt that everybody’s lives and personal ‘words’ were too different to be appropriately responsive to any one person’s guidance.

My recent experience, growing to intensity since this site began after visiting Esther in Florida in March 2017, has taken me to a place where I now hold the same view. I tried to listen to some more today in preparation for writing this, but I had to stop. One reason might be that today’s energy has only just passed over my 22 degree Mars and other 4 points. Our energies seem currently to be at very different ends of the scale. I am grateful to have survived, if that is what has happened, thus far. When Esther is having some respite from the transit in October/November I will be revisiting the abyss – an opportunity for personal assessment (or transition).

What about the corona-virus? A player in all of this for sure. I was in self isolation all last year deep in the local woodland, which is something Saturn and Pluto like to do – to take us away from everything and anyone solid and reliable. The plan was to re-enter society this year. Who is it who laughs when we make plans?

I hope that both Esther and that I emerge stronger from all this. If I become tempted to listen to her seminars from this year, any of them, and if I discover anything more, I will be sure to check back in here.

Thank you for reading. Good luck if you are also involved in this very testing vibration.

This entry was posted in Abraham-Hicks, Astrology. Bookmark the permalink.