I caught a programme on BBC i player last night about Billy Connolly who was having 3 portraits created by 3 very different Scottish artists, all from Glasgow or with some involvement in the place of his birth. I was quite moved by seeing Billy for the first time since his experience with Parkinson’s Disease. As always he was impressive to me.

An analysis or reading of a birth chart takes a few hours if done in any depth, but in the time I have today I looked at his chart and soon saw the pattern that reflects the man on stage. Here is his chart with an accurate birth time. Over the years he has given many details about his life. It is as if his favourite place for talking about the most private material is in front of an audience. And it continues to be as he goes on stage with the disease now in progress for 3 years. He uses it in his act. His movements are subdued but the material is still as compelling (for lots of us). 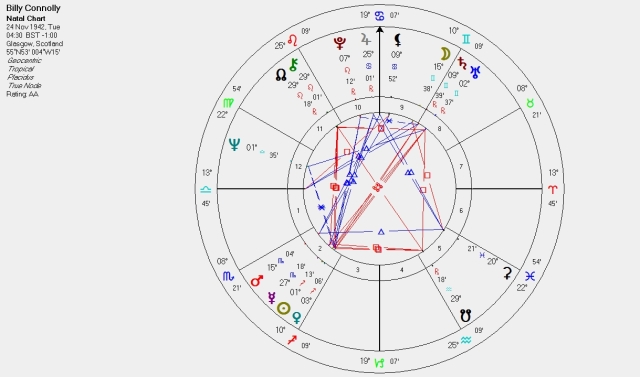 I was especially interested to see his progressed chart (secondary progressions) and to note the broad outline his life has taken as his p-sun’s movement from 1 degree Sag. is changing at the same intervals as his Saturn Returns. So for the first 29 years of his life he was at his most purely excitable and ebullient as the p sun coursed through the rest of the degrees in Sag. And t-Saturn was returning to its original degree and passing over Uranus just before and simultaneously as the p-sun enters Capricorn – the other personal planets also moving along through Sag and into Cap. in their own time with Mercury entering Aquarius first.

His Uranus/Saturn conjunction in the 8th is a very tricky energy to live with as these two archetypes have a very difficult story with Uranus, the god of the heavens wanting to consume his son, Saturn so as to dispose of him and his siblings – but Saturn (with Jupiter’s help) plot a way out of this misery and triumph on Earth as the race of Titans (check the story if interested, this is just from memory). Archetypal stories are the eternal stories of humanity. They return in every generation in a different form. So here in Billy is the energy of the sky god and the earth god in uncomfortable union. His reference is up, then down, then out, then in. Only the good humour and emotional intelligence makes it all work to the degree that it does.

So these two planets/energies in Gemini, mark a place in Billy which is a continuous inner battle. As they are in Gemini and as this sign is on the cusp of the 9th house, communication is part of the process. In fact the moon, his comfort zone, also in Gemini, insists on it. And Jupiter, ruler of Sag. and naturally of the 9th, is strong in this chart as it is the sun-ruler also, the sun being also in conjunction with Venus, the chart-ruler, and Mercury: all happy Sagittarian voices dynamically opposed to Uranus, Saturn and the moon which is dragged in by its conjunction with Saturn. This, in a nutshell, is the effervescent, outspoken, profane, shocking and hilarious Billy who takes as from the dark depths of Scorpio on a fun journey to the explosive frustration of Uranus/Saturn.

Note p-Mars especially, as at age 43 Billy begins a new phase with his p-new moon – that’s moon and sun in Capricorn; and Mars has travelled exactly 30 degrees as well from 15 Scorpio to 15 Sag. At this time I expect if we look we will find a distinct turn in his way of life as Saturn is now more present. There is more to rail against or to come to terms with or to use as leverage against his innate rebelliousness. This is a life trying to come to terms with itself, through humour and investigation and much self-expression.

Then let’s jump 30 more years to 2015, and while the p sun has already been in Aquarius since 2000, now the p-moon joins it and a new phase of life begins. (It was coming in with the tide from the year before.) There is no longer the pressing need to be irreverent as Uranus and Saturn both respond to the energies of this sign. Reading a few news reports of his life since the diagnosis in 2014 he was quoted as saying it is okay to be weaker, less strong. It is as if, despite inevitable times of fear and loneliness, he has come to a sort of peace and reconciliation with the idea of a progressive terminal illness. Chiron in Leo is reflected in his ‘humblebum’ humility to this sign ruled by the sun itself which is in the 11th house of reactionary tendencies which Chiron will cause to come up for review at intervals – especially age 50.

I think it must have been a relief when his p-sun entered Aquarius in 2000. Something will have shifted. The progressed chart seems to reflect how we are on an inner level while the transit chart brings experiences for us to deal with that are seemingly out there. There is much more to dwell on with this man, but for now this is just a respectful nod. 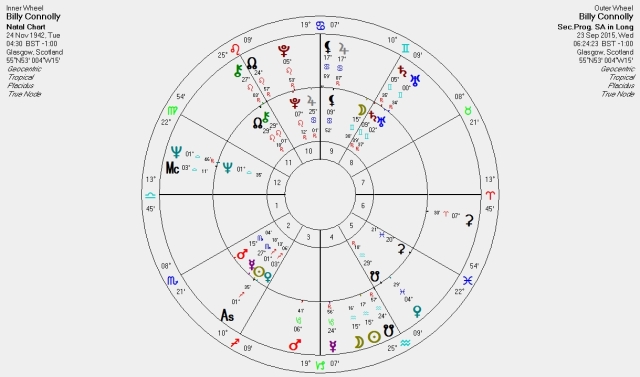 Billy has a lot of self-confidence as referenced by the planets in the second house, but can we not glimpse the soul who wears the birth chart? Some lives are on public display, some are not, but all have their challenges which are un-measurable by any common standard as we are prepared for them before we take our first breath.

And, knowing the unique differences between each person, how can one five-step formula help us all? I refer of course to A-H. But perhaps it depends on whether or not we ask that it will be given by A-H in particular. Billy has also found that meditation helps him to cope.

This entry was posted in Astrology. Bookmark the permalink.